Growing up in a small town just ten minutes north of the city of Boston, food was limitless. Boston offers all kinds of foods from all over the world, so trying different foods became a huge part of my teenage life. One major problem I had to deal with though out life was a severe peanut allergy, which limited my food options.  On the plus side, my allergy expanded my horizons on trying different foods, and I learned to thoroughly investigate the ingredients in each food I put in my body. I grew up reading labels, to know how much sugar, carbs, and calories were in every food I ate. It set me up to be much more aware of the good and bad foods and establish healthy habits.

I have always been fascinated with the food industry and how it works, since growing up behind the scenes in my Dads restaurant,  I recently watched an award-winning TED talk titled, “Teach Every Child About Food” given by the famous Jamie Oliver. For those of you who do not know, Jamie Oliver is a English chef who has done more than cook delicious meals. His mission is to change the way children look at food in order to decrease obesity across the globe. 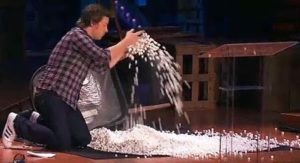 Jamie demonstrates how much sugar is served to school children from flavored milk alone.

Obesity is at an all-time high across the U.S, making it one of the leading causes of death.  In 2010, West Virginia was the number one state with the highest obesity rate in both adults and children. Jamie moved to Huntington, WV and began teaching parents and schoolchildren how to cook fresh, healthy food and eliminate unhealthy processed foods. It is important for parents to understand that presenting a healthy mindset to their young children sets them up for a long and healthy lifestyle.

I know it is easier said than done, but there are different ways to provide your family with healthier food options rather than grabbing a quick bite to eat from the local fast food chain. Don’t get me wrong, I love french fries after a long beach day, but those things should be saved for a special occasion dinner every once in a while.

In his TED Talk, Jamie touches upon is the idea of fast food vs home-cooked food. I come from a large Italian and Irish family where cooking food was never a problem. I was lucky enough to have a home cooked meal filled with nutritious fruits and veggies mostly every night, made by both of my parents, but as we all know, it’s not always that simple. However, even with busy schedules and a limited budget, cooking a nutritious meal should be something that every family is able to achieve.

In Jamie’s ABC television show, The Food Revolution, Jamie focused on improving school lunches.  When kids are given a unbalanced lunch, they begin to learn at an early age that nutrition is not that important. Growing up, school lunches in my area consisted of sloppy joes, pizza, chicken nuggets, and the occasional “breakfast for lunch” meal once a month. All of these meals teach kids at a young age to eat with their hands, further promoting the fast food industry.  This subject needs more attention.

In the past eight years since this TED talk was filmed, awareness of food ingredients has increased and children are given healthier food options at school, but obesity is still on the rise and the fast food chains are bigger than ever. With more and more fast food stores opening around the country, children are becoming used to eating out for dinner more than sitting down and eating a home cooked family oriented meal. It is not only important physically, but also mentally. It helps children grow up in a family where every night they come together to sit and talk about each others day, going around the table saying their highs and lows of that day. I stand with Jamie when he says that kids should be taught the basics on cooking from a young age until they are able to cook on their own.

It’s easier said than done, but it starts with us, the up and coming generation of young adults. Are you ready to make a change? I am.

Jess Frate is a senior at the University of Rhode Island.  She spent a semester abroad, in Italy and publishes her food blog on Instagram: @whyyoualwayseatin.